Employee engagement is in essence a communication skill. You want your people to engage in your projects – talk to them! What to talk about and how it relates to human nature is the subject of this article.

Most of the people deep inside want to conform, meaning, to be like others. Do you yourself want to feel liked, understood and appreciated? People around you too! The question – do they want YOU to like, understand and appreciate them or someone else? This is a matter of position, respect and trust.

Whomever we value and trust, we would like to get his or her approval, appreciation and respect, accordingly. One way to get it – to conform to that person. This is the way of our social nature. This includes agreeing with ideas, using the same words, doing similar things and even sometimes dressing the same style.

In general, people tend to act so others around them would agree with their behavior, talk about things others would understand and talk back. That’s especially true in the manager-subordinate relationship.

Point to be taken: if you clearly state your expectations, your realities and your values to your people, they will tend to adhere as much as it is comfortable to them and they can live with the consequences.

Of course, if your expectations, realities and values are too high, most of the people would not go that far from their own and would feel not in the right place, which might result in them leaving the company or going into deep underground of antagonism and rejection.

Let’s say you want David to be more involved in understanding the product requirements for his next task. Usually he sits at the meetings, silent, and then does something only to have many problems found during the testing phase stating that his work is far from what was expected by the Product.

What do you do? Simply saying him to pay more attention at the meetings and personally asking Product questions about the task would not really work. That’s because, if you ask about his expectations, realities and values, David would say, that he expects that all the requirements should be written in “technical” and “simple” English, in words he can understand, that he expects Product to come to talk to him personally, and he actually values micromanagement from you, meaning – frequent checks during the development phase to prevent future shame.

Your position? You, on other hand, expect HIM to go to the Product during early state of the task fulfillment, to show the very earlier version of the developed functionality, to discuss it and bring things fully independently to completion in alignment and agreement with the Product.

Is it close one to another? Far from it, but still you can now bridge it! First of all, congratulations! Maybe it’s the first time you even realized the gap! In most of the companies, I know of, NO ONE EVER ASKS!

So, solution? You should tell him… NO, NO, NO! Telling someone something does not work for real. Did you try it with kids? Results? In the long run?

You ask David, how HE proposes to bridge the gap! As long as it’s a step forward – ACCEPT it! And make sure David knows that he is now EXPECTED to do according to what HE promised.

And then, YOU PROVIDE FEEDBACK to David as to what you see actually happens, CONGRATULATING on every step taken towards the promises David made, and IGNORING any step not taken. That’s called “validating good things to make them stay and evolve”.

In the end of the process, when new expectations, realities and values are reached, you discuss with David the results, ASK about possible improvements, assist with removing stops, and then rinse and repeat.

Please, go on and try this – I would love to hear from you on the results you achieved. Also, please, comment if you tried something similar and how it worked.

In the meanwhile, don’t forget to download my free report on Employee Engagement research, stops and enablers – GET IT HERE.

Research based report on
how to create, develop and maintain
an engaged, effective and productive
technological delivery team 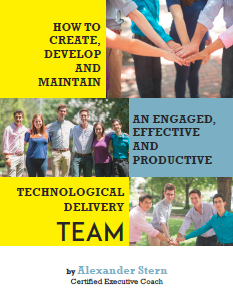 What is on YOUR mind?

Do you have an issue you need an advice?
Would like to see if there are effective and workable solutions?
Please, feel free to contact me here -
check the contact details.